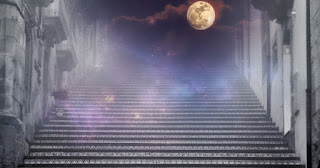 How extra-celestial beings changed the course of human history.

There are three periods in human history. In the religious circles, it is commonly believed that in total, God sent 124 000 different messengers and prophets. Out of them, 14 000 were only Adams. In the theosophical circles of Abrahamic faiths - Judaism, Christianity and Islam - the scholars understand that there was only one Adam, but they do not know how to justify it.

The First Period: The Adams
Now we’re living in the scientific era. We never had the type of transportation that we have today in the past. We have aeroplanes, motorised boats, etc. We can now travel by sea, air and land. Everything has become so advanced and travelling has become so easy and comfortable. However, in the olden times, travelling was a nightmare.

Christopher Fernandez was a Spanish, Christian leader. He sent a man called Christopher Columbus on a journey. The idea was to discover a land where they could establish a Christian kingdom. Spain comes from the word ‘Usman’ which we call ‘Ottoman’ in English. The words ‘España (Spain)’ and ‘Hispanic’ are derived from it. Christopher Columbus was able to make a boat with an automatic motor and go far out into the sea.

He was looking for any barren land when he arrived at the soil that we call the United States of America today. The only people he bumped into there were the Native Americans. Because they had dark complexions, he thought that perhaps they were Indians, so he thought that he arrived in India. He was the first to arrive from across the Atlantic, but people still lived in America before he arrived.

If it was only one Adam who came, then it would become a mystery how the progeny of one Adam dispersed itself and scattered into so many different islands and remote places of this world. Some people live in the mountains, in igloos; their nature and culture are different.
So there was not just one Adam; 14 000 Adams were sent. Human beings have inhabited this world for millions and millions of years. For that enormously long period of time, God had only seen people who would worship him in their worship places. These people did not know anything about God’s love or the existence of celestial realms where, other than them, different types of creatures inhabit.

In terms of knowledge and understanding of the cosmos, their intelligence was zero. They couldn’t think of anybody else for except themselves. Even today, we do believe there are angels and genies, but we haven’t seen them with our naked eyes. A majority of people haven’t seen angels walking [in the world]. However, we believe it because we have been told of their existence by trustworthy individuals [that we know to be saints of God].

So for as long as the common man existed in this world, who didn’t know about divine love, God had been experimenting [with] different species of humankind. He made many different types of human beings. Sometimes, he would change the colour of their skin. Sometimes, he would change their height. However, the culture of hatred was pretty much persistent. Their hateful culture of killing each other never perished.

In the end, maybe 6500 years ago - that is pretty close in comparison to millions of years since the inhabitation of humankind on Planet Earth - God, as it has come to our knowledge, got bored with the kind of worship and culture that human beings carried for that long. Then he decided that now was the time for him to upgrade human beings in character and in spirituality.

Prophets who gave the world an insight into the future - which we normally call prophecies - these kinds of prophets were not there in the era [pre-existing the last Adam]. The first time a prophet was introduced in this world with the ability to foretell the future was only 6500 years ago.

Before that period of time, the human heart and soul were barren. There was no sign of spiritual cultivation because there was no seed of love. So they lived in complete oblivion and darkness of ignorance.

Then, about 6500 years ago, God decided to open up a little and allow human beings to be in contact with the other side of the world for the first time in human history. That was a wonderful mark of the divine exuberance and excellence.

Then came this radicalised message: love God. Don’t forget that for many million years, nobody heard such a message. It took them by storm.

They would say, ‘You don’t even see God and you want to love him? How?’ That was the very first divine inspiration. Before this, they would only go to worship places and [pay homage to their respective forms] of God, because they didn’t know anything.

The Second Period: The Last Adam
Then the last Adam, ‘Adam the Eminent One’, came. The first thing which was almost impossible for [people] to digest spiritually was to relate to the last Adam who was created in Paradise and then descended onto Earth. He was different in nature, character and complexion from them; even the nutrients he would eat [were different]. The initial thought that crossed their minds was, ‘He came from above the skies. He must be a son of God.’

Now, when we talk about the first divinely ordained and anointed Adam, with the knowledge of eminence - the knowledge of spirituality which connects man with God - we involuntarily assume that every single person in that era of Adam was blessed with this knowledge. This is where we go wrong.

Then came Jesus. Jesus is a little different in that he was only given 33 months of ministry. Do not forget: other prophets and messengers spent years and years [spreading their message]. Adam lived for 931 years, Abraham was over 125 and Moses spent a lot of time among people. Jesus’s ministry did not even last three years.

Muslims talk about the grandsons of Prophet Mohammad; they commemorate their sorrow and how brutally they were killed in Iraq. They talk about the torment they went through of thirst, hunger and fear. However, nobody - not even Christians - talks about the turmoil and hardship Jesus had to face.

Firstly, Jesus didn’t have a house, a bed or pillow. He had no building to call his home. He did not enjoy anything that belongs to this world. This was the quality of his self-imposed austerity. He used to say that he was on a divine mission and he wasn’t here to enjoy life. He did not like this life because he is immortal.

When Jesus came to this world, he would open his mouth and the breath of eternal life would [disperse]. He talked about the Kingdom of God, spiritual infusion, the Unseen World and he talked about the Father. He talked about real, rapturous love. However, there were only a few who were [ready to become] recipients. There were only a few disciples who were really close to Lord Jesus Christ. One of them was Thomas. If you study the Gospel of Thomas, you would come to know of the knowledge I talk about: the Unseen World.

Tell me: is this the son of God or God himself because Jesus said what God says about himself in the Koran.

The blind would come to him; he would blow upon their faces and their eyesight would be restored. He would blow upon people who were not able to walk [and heal them]. When they were healed, they would want to pay their homage to Lord Jesus Christ. They would say, ‘You have done a favour [upon us].’ He would reply, ‘No, I haven’t done a favour yet.’

Jesus clearly said, ‘I am the only way to the Father. You only reach through the Father through me.’ [John 14:6]

What Jesus talked about was mind-boggling. In front of him were people who didn’t know who they were sitting with. They didn’t know that the person who was standing in front of them was not a man. It is a gross injustice if you know Jesus as a son of man.

A man is known by his character, not by his family lineage. Your ancestral history doesn’t reveal anything about you.

Jesus was a favour upon mankind. [However], you can count the number of people who were blessed by him. They were seven in number, who were sent by Jesus to seek asylum in caves. They fell asleep and have been there for the past 2000 years. Now they’re back with Jesus.

After Jesus came Prophet Mohammad. When Prophet Mohammad came into this world, he was equipped with the spiritual knowledge which would allow people to see God. With his help, many people were able [to reach the audience of God].

It is no wonder that he didn’t do anything for the many million years prior to [the creation of Adam the Eminent One]. When he started to reveal about himself, little by little, it only took 5000 years for him to be done. In this span of time, all the Grand Messengers had been sent. All the knowledge was sent, starting from the articulation of God’s name in the heartbeats and coming to an end with the ability to see God and enter into a physical meeting with God. That is the culmination, the peak.

Now, you shouldn’t ask God to send somebody else, because he is done! [He has nothing else to offer].

The Final Period: The Awaited Ones
When I was in Pakistan, somebody asked me, ‘Why has the image of His Divine Eminence Gohar Shahi has appeared on the surface of the Moon? Why not the image of Prophet Mohammad?’ I replied, ‘Why? If Prophet Mohammad’s image appeared on the Moon, what would you receive as a spiritual benefit from that image? He is not here.’ It is impossible.

Then somebody sent me a question, ‘You say that your Gohar Shahi will return to this world. Why can’t Prophet Mohammad return?’ But if Prophet Mohammad were to return, what would he do? He has already done everything he could have done.

Immigration in the United Kingdom, New Zealand and Australia have been taken over by the US’s Homeland Security. [These countries] cannot tackle the upfront threats, so Homeland Security is taking care of their immigration. Similarly, God is done. Now the Gohar and Jesus team from the Unseen World has taken over.