The Nafs and the Intellect

A Spiritual man is one who has purified his Nafs, enlightened the heart, illumined the soul, and secured the intellect (Ana).

The Nafs starts from the belly-point and it rests in the head. In some individuals, the Nafs uses its lower part and in some others, the Nafs uses its upper part. When the Nafs uses the lower part, one tends to engage in indecent acts. However, when the Nafs uses its upper part, the intellect is affected, and the mind is often subject to a weird thought-process. I have seen people who can’t think straight. It’s not easy to judge them whether it’s because of their Nafs or if the hypocrite heart is working behind the scenes. In some cases, it is both. Some people's minds are severely affected by the distortion of their Nafs and their hearts also plays a secretive role in destroying them.

Nifaq (Hypocrisy) is a predestined disease and nobody can help such a dual-active heart. However, those that suffer from the upper-disguise of the intellect can be fixed with a little more hard-work by the Guide. Such people whose mind and intellect are controlled by the Devil and their Nafs can’t ever think straight. They search for Positive Energy while they are dipped in the ocean of negativity. Such persons can’t find guidance and they always end up displeasing the LORD, until they place their heads at the feet of the LORD, and beg for their life hereafter and salvation.

Posted by Younus AlGohar at 02:30 No comments: 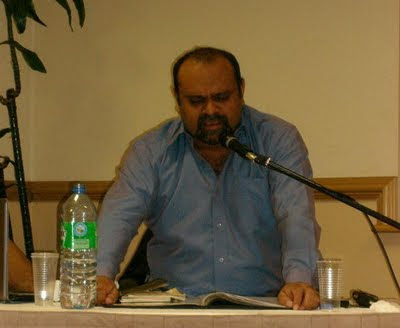 MFI celebrates Jashan-e-Shahi on the 6th of September 2009 in London, England.
Jashan-e-Shahi is the Day of Mehdi when His Holiness RaRiaz Gohar Shahi was crowned the title of Imam Mehdi/Kalki Avatar/Messiah.
Posted by Younus AlGohar at 04:58 1 comment: