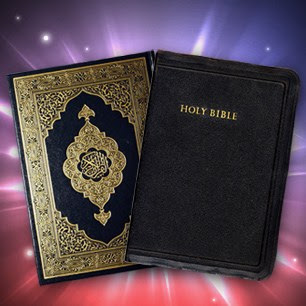 
Remember this is what we do we love only those who love us we take care of those only who take care of us we are kind to those only who are kind to us, this is what we do. The rest is fine but the last line that says God is kind to the ungrateful and the evil, this is different in the Quran. What Jesus is saying is something different, Quran doesn't say that. Quran says: If you are thankful and grateful to God for whatever reason, abundance of Rizq (provision), that he gives you lots of Rizq and this is why you are grateful to him then having been grateful to God you will see the reward in form of increase in your provision and those who are ungrateful, God doesn't like them and God doesn't increase in their provision. And the evil, God doesn't like evil according to Quran, and according to the Bible God is kind to evil. Both Quran and Bible are considered the Divine Word. Then why there is a noticeable difference between the two? What Jesus is saying is a taste of wisdom but it is not easy, because we have this is in our nature that we are only kind to those who are kind to us, if somebody is abusive to you, you instantly change your behaviour with them.

When I look into the depth of the Bible and the nature of the discourses of Jesus Christ I find it very appealing to my heart. Or maybe this is because Bible talks about love profusely. I have not found one single Ayah in Quran that discusses these matters. Although Quran says some people love God and God loves them. But, Quran does not give advice like this; don't think I am against Quran. I am just giving you a comparative view of these two different Holy Scriptures.

“If you love those who love you what benefit is that to you, for even sinners love those who love them.” Now, if you do the same as sinners are doing, then what is the difference between you and the sinners? Your character should be up-lifted. Your character should be elevated. And then Jesus says something really, really eminent. “If you love your enemies, and you do good and you lend, and in return you do not expect anything.” What is the reward? Jesus says the reward will be too high, too great. The reward will be that you will be taken by God as His sons. This is a bemused theory often given by the priests, that Lord Jesus Christ is the long forgotten son of God. Whereas in Bible if you do that you will be short listed among those who are sons of God.

The reason for giving a comparative view on both the Quran and Bible is so that you understand and realise how difficult it is to unify all the religions into the Religion of God and also, why God has said,

“Had I not been waiting for the Kalima-e-Sabqat, all the humanity would be but one United Nation and would not be dispersed, divided, shattered and scattered into many groups, many tribes and many religions.”

The most difficult thing in unifying the religions and bringing them all together in the Ummat-e-Wahida (One United Nation) is that people who follow Jesus Christ and the Holy Bible, the nature and the message of Bible is different from the nature and message of the Holy Quran.

The Holy Quran has its own charms, its own nature of spirituality. When you read the Holy Quran you instantly realise that this book is not from a human being. This book is not from a Prophet or a Messenger because the compelling environment which the recitation of the Quran creates is so majestic and it's so heavy that you become affected by the compelling nature of the Holy Quran. And even if you do not understand Quran, you just listen to the recitation of Quran in some beautiful voice and you will start shaking, you will feel the intense spiritual vibration. Maybe not everybody feels the same as I have experienced and observed myself, however I do understand that there is some majestic vibe in the recitation of Quran. When it comes to the bottom of the truth and you want to know the nature of the teachings and its application and its impact and then the expectations of the outcome, Quran has very little to offer in formation of the character. Those points that Quran mentions in regards to the formation of the character you can only talk about it, but Quran does not give you the solution.

The Quran says do not backbite, do not slander against anyone and do not be curious as to what is who doing. It's none of your business and then Quran goes on to say that would you like to eat the meat of your dead brother? Of course not, you would hate it. These are the words of Quran. But Quran doesn't say how to avoid from performance of such great esoteric sins like back biting, slandering and unnecessary curiosity. Quran doesn't offer a solution. If the solution was to be found in Quran then the religious scholars of Quran would have purified themselves from these sins because this group of religious scholars are more involved in these esoteric sins than any other member of that particular religion. In a similar way Bible talks about love but Bible doesn't talk about the procedure, how to obtain love.

It is very unfortunate, before His Divine Eminence Gohar Shahi's arrival in this world nobody was able to give a view on these Holy Books. People were afraid if they didn't understand anything they would think it is some wisdom and we have to keep our mouths shut. But here you see, because His Divine Eminence Gohar Shahi has given us some more advanced teachings than what we have in the Quran and Bible, we can understand where these teachings are coming from and what are the targets set by God.

Example: God is kind. If God is kind in Quran, it is impossible that God can become unkind in the Bible. With the change of religion God's nature will not change. The message can differ in the Bible to the message given in the Holy Quran, that's okay because He gave the scriptures to the human beings according to their nature. Then no matter how many scriptures have been granted to how many messengers and prophets, the nature of religions will vary one to another. However the characteristics of God shall never change. If God is kind he is always kind no matter if he is kind to a group of Muslims, or a group of Christians, or a group of Jews. It is very unfair to say God is kind to the Muslims but not to the Christians because this is against God's character. If God is kind he will remain to be kind because he is immortal. His character is immortal, his words are immortal.

They say that Iblis had a Dua (supplication) in his memory and what will happen towards the end just before the Day of Judgement, he will say that supplication and God will forgive him. And then when Iblis was saying this in front of Lord Ra Riaz Gohar Shahi, His Divine Eminence Gohar Shahi said to him, “Forget about Dua, if you place your head at these feet you will be forgiven. Gohar Shahi is kind to Iblis also.”

and soon after the ayah was revealed Iblis came. Prophet Mohammad asked him what makes you come here, why have you come here? He said ‘Ya Rasool Allah the ayah has been revealed. I also live in between these Alameen (realms of the earth and skies). I also deserve your Rehmat (blessings). Prophet Mohammad as according to his nature is very innocent. Maybe he was more innocent than he was kind or maybe both, in which case the chances of Iblis' forgiveness was double. The Prophet said, "Okay fire away." He said, "When people say ‘La hawla wa la quwwata illa billah’"

In addition to His Divine Eminence Gohar Shahi there is only one example, only Prophet Mohammad has been recorded to have been kind to Iblis. This is the character of Prophet Mohammad. He has been kind but God isn't. The Quran doesn't say it. Now, because of the difference between these two scriptures, I assume the source is different and then if you love your enemy and you do good to your enemy the reward is so great, what is the reward? God will take you as His sons. It means the job is very great. It is not easy to love your enemy to do good to your enemy. The reward reveals how difficult the task is.

What is enmity? Where does it come from and why enmity differs from person to person? For example a common man and a holy man possess the same amount of enmity for someone, but, the intensity of enmity will be different. Why? Because enmity increases, if this enmity is born by somebody who still has Nafs-e-Ammarah, who still has Khannas who still has Shaitan living in him all these things increase the intensity of enmity. If somebody is an enemy of a holy man, that holy man does not have Shaitan in him, his enmity doesn't increase, that holy man doesn’t have Khannas in him so he is safe from the whisperer, the holy man does not hold grudge against anybody, including his enemies, so when all these ingredients of hatred are absent in enmity then that enmity is very low-profile. And with the help of the sublime character that enmity will be superseded by the sublime character and by the intensity of love in that holy man.

The holy man may have enmity for somebody but his nature and the nature of love and his inner purity will not push him to harm his enemy. But the nature of love will compel him to love even his enemy. That is only possible when form head to toe you have become Noor (Divine Light). That is only possible when from head to toe you have become love. This is possible only when you have acquired complete and culminating love and purity.