The following is an excerpt from His Holiness Younus AlGohar's speech (video above).

In English, 'Pakistan Tehreek-e-Insaaf' means 'The Justice Movement', thus indicating that the prime manifesto of their party is justice.


A poor man cannot get justice in Pakistan; all his rights have been taken away from him. It is a crime for a poor man to even breathe. It is a crime to raise your voice for the truth. There is one rule for the rich and another rule for the poor. The people in Pakistan have been deprived of their principal, fundamental rights. There is no system of education in place. Either the politicians in Pakistan hold degrees from Oxford, Cambridge, Berkeley or they hold fake degrees (that they have bought, not earned). Such is the educational divide in Pakistan. People do not even know what education is.

There is a long story of tyranny and injustice behind our support for this movement started by Imran Khan. Religious clerics and sectarian elements all joined hands and pressurised the police and judiciary to register FIR's against HDE Gohar Shahi. His Divine Eminence only spoke about purification of the heart; He said nothing against the Quran. But they registered cases of Touheen-e-Quran/Mazhab (Blasphemy of Quran and the religion) against HDE. HDE, on occasions in His speeches, stated that anyone who claims Prophethood is a Kafir (infidel), yet they accused HDE Gohar Shahi of Dawa-e-Naboowat (Claiming to be a Prophet). They left no stone unturned in defaming HDE Gohar Shahi. Behind them were these corrupt people of this corrupt system. They accused HDE Gohar Shahi of murder and many other false cases.

The point is: cases can be registered against a person and he will be punished without evidence if there is a powerful, corrupt person behind it.

I cannot go to Pakistan because I have similar cases registered against me. But what crime did I commit? I was never allowed to say anything in my defence. Who shall I go to? Where will I get justice when the entire system is corrupt? What kind of democracy is this?

The law says, 'You are not a criminal until you are proven guilty.' But in Pakistan, the accused becomes a criminal without any evidence and there is no one to [object]!

We are in favour of a Pakistan where the judiciary is free. The judiciary should be very strictly confined to interpretation of the law only. Their judgments should not be opinionated and their judgment should not have any political or whatsoever pressure. This corruption has played havoc in our country; therefore we strongly support this justice movement.

Judiciary should not only be independent, but it should be confined to interpretation of the law. The job of judges is not to give their opinion about any alleged crime which might have taken place.

The police needs to go through an overhaul. Politicians should be given a Charter, supported by the Constitution of Pakistan, which they must abide by. If the judiciary becomes independent and starts giving true interpretation without their opinions mixed in it, then people will not feel suppressed. If an allegation is made against somebody, they will not take the law into their own hands.

When an innocent person is alleged of any crime and he knows that he won't find justice if he goes to the court, then what happens? Then he takes the law into his own hands and this is where terrorism, fanaticism and extremism starts.

We want a peaceful society where people should feel free. They should not feel suppressed or oppressed. This will happen when everybody is given his and her rights. When you see police in England, you feel a sense of protection; but when you go to Pakistan and you see a policeman - I, personally, feel really fearful. In Pakistan, even if you are sitting there and reciting the Quran, the police will press any charges against you that you were not even involved in. The police should be taken care of and they should go through a thorough process of cleansing.

We have the Constitution, we have laws, we have everything - but what we don't have is implementation. In order to implement those laws on public, the one implementing the law on the public should be of a clean character.

Why? Because if he himself is a criminal and he knows that he would also [be prosecuted] if a certain law is imposed, then he wouldn't want to implement that law. Those should be given the responsibility of implementation who have a clean record and who are civilised people.

I'll give you an example. If you want to apply to become a cab driver in London or in Manchester, then you have to have a badge issued by the council. When you apply for that badge, you need to provide the council with a character certificate from the police which must show that you are not a criminal. It must show that you have never been involved in any kind of offence and that you have never been convicted. To become a cab driver, you have to have a clean record and an honest character. What about a politician?

In Pakistan, all these politicians now who are either in the government or the opposition party all have hundreds of corruption cases against them. They are the most corrupt people in Pakistan and still they are in the government.

They do everything; they commit any crime and it is witnessed by the police, the judges and lawyers but they are walking free because the entire system is corrupted.

I wouldn't be wrong if I said Pakistan has practically become a failure state. What else is a failure? Pakistan has no judiciary, no police, no transparent elections and no honest politicians.

On top of everything, Pakistan has corrupt clerics in the country. The most corrupt people in Pakistan are the clerics. The Muslim Scholars, media, lawyers, judges, doctors and police: all the departments in the governance and administration are corrupt. It's like a cry in the wilderness; there is nobody who can give you justice. You go to the courts and you find no justice. You go to the police and you find no protection. What should you do? Kids as young as 4-5 years of age are committing suicide. There are many cases whereby parents killed their own children and then they committed suicide. Poverty is increasing in Pakistan every minute; people have no jobs.

A Pakistani citizen is not allowed to travel to an international destination without having a polio certificate in his possession. When volunteers go [to give polio vaccinations to Pakistanis], the Taliban and Muslim Clerics shoot those volunteers. Therefore, the children in Pakistan are becoming disabled and the entire nation is falling into pieces. They have all sorts of diseases and all sorts of illnesses these days. 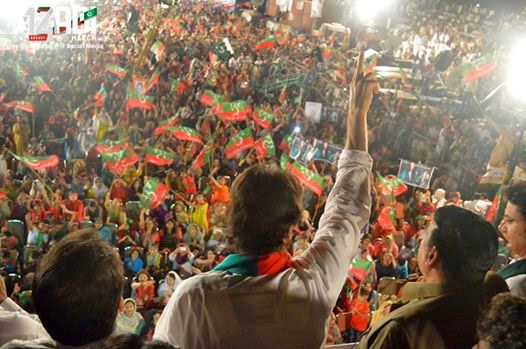 Pakistanis also have the right to enjoy fruits and looms of a true form of democracy.

I request the international community not to mistranslate the situation in Pakistan. Do not support someone who is a fraudulent Prime Minister. Nawaz Sharif does not have the public mandate in his kitty bag; he rigged the election. If you continue to support such people, then you are paving way for the Taliban to jump in and commit more atrocities around the world. Do not support these silent terrorists.

They have hijacked the entire nation. Let there be transparent judiciary, let there be transparent politics and let there be true democracy in Pakistan, so that even Sufis like ourselves can travel back to our homeland. We can also try to educate them so that Pakistanis - who are considered to be fanatics and terrorists today - are given a chance to learn to be civilised human beings in this world. The opportunity should be given to a Pakistani to learn to live peacefully. But that will only happen when all the tools of the trade are available and all the tools of the society are ready to function; when the justice is without any political or sectarian pressure and when the police is working [correctly].

Oftentimes, we admire democracy in the United Kingdom of Great Britain. I wish we had the same quality of democracy in Pakistan also. We admire British police: they are very fair, they are wonderful and you feel sense of protection. Why can't we have the same type of police in Pakistan? There are so many Pakistani politicians who are actively serving the public as politicians in the United Kingdom. Why can't other Pakistanis serve the people in Pakistan the way that Pakistani politicians in the United Kingdom are serving the people? Pakistanis serving here were born, bred and educated here; they know the principles of true democracy. In a similar way, an opportunity should be given to the Pakistani nation also, whereby they should learn principles of true democracy, real politics and they should also be able to respect independent and transparent judiciary. If Pakistan's judiciary had been functioning according to the law, there wouldn't have been a 22 day long sit-in in Islamabad today. Every single party in the Parliament admits of rigging; still, there is no solution. Still, they are not coming to terms with a meaningful dialogue. There is a deadlock because they have become stubborn.

A couple of years ago, when Nawaz Sharif was in opposition and PPP (Pakistan Peoples' Party) was in Government, he said to Yousuf Raza Gillani, 'There is a case upon you. You should now resign and if you walk free from the court, you can serve as a Prime Minister again.' Now, when he is going through the same situation, he says, 'This is unconstitutional.'

This is absolutely ridiculous! But people have turned a deaf ear. Everybody is saying, '[Imran Khan's supporters] are not peaceful protesters and they are attacking on Pakistan Television (PTV). They are attacking on the Parliament House. These buildings are the assets of the Nation.' But what about the nation [itself]? Secondly, they are not demolishing any buildings. They went inside and they are sitting on the lawn. They did not enter the actual building. The language that these politicians are using for the Pakistani Nation today is really abhorable, admonishable, deplorable and condemnable. They are saying, 'Clean the city of this filthy class of villagers.' Is this democracy? Their language is not even civilised. This is really terrible.

We are very happy living here in the United Kingdom of Great Britain because the system is pure, judiciary is transparent and there is no rigging in the elections. It is a wonderful place to live in. We are inspired by this true form of democracy. [It is due to the] sense of admiration towards the democracy here that we want the same level, style and health of democracy implemented in our homeland. [We want this done] so that we can live in peace. So that when a baby is killed, the parents should not commit suicide; they should go to the court with the hope that justice would be served. Today, the problem is that justice is not served!

The country has been hijacked by 600 opulent families and their opulence is illegitimate. Their abundance of wealth is questionable. It is black money. Every single politician that you see in the Parliament House is involved in money laundering on a very large scale.

The solution is there, but there is a saying in Urdu: 'Who will tie the bell around the neck of the cat?' Probably, the man has come now. I would like to request the International Media to morally support this cause which will bring about true democracy in Pakistan. It will bring about the Pakistan which was conceived by Quaid-e-Azam, Muhammad Ali Jinnah.

Image courtesy of Pakistan Tehreek-e-Insaf.
Posted by Younus AlGohar at 11:47